Packing My Bags For The Misty Mountains

“Mountains are the beginning and the end of all natural scenery…”

👆🏼 …According to Ruskin, who seemed to know a thing or two. And in my mind, their awesomeness is unparalleled. After a month working and hiking in the Spanish mountains I had plenty of time to ponder both the scenery aspect and the people who live within them.

We both love the mountains and any activity which allows us to spend time in them is hella good indeed. Despite feeling extremely secure on our land in France and also having been lucky enough to have spent an inordinate amount of time in the mountains already, there is still something that calls me, and so, I must go (thanks John).

This year we were lucky enough to continue the annual training of the Collett’s Mountain Holiday teams in their Spanish resorts of the Picos De Europa and the Pyrenees. Each time we do this I feel very fortunate and happily exhausted. During this stint I approached it with the idea of allowing myself to delve deeper into the true essence of the people who are born, live and work in this environment.

One observation, which I always come across is the sincere stoicism of mountain people. Nothing is ever a big deal, especially in the tiny, isolated villages way up high. Perhaps in the lower, more capitalised resorts the stakes are perceived as higher and therefore people are more highly strung, but in the true villages the people never seem to be flustered or remotely phased by anything. They live very active lives for a lot longer. The idea of retirement just doesn’t cross their minds – they work until they die. Work is a slightly different concept in the mountains, without work one doesn’t survive.

Perhaps it’s a result of the extreme weather and conditions – they become the decision makers; the truly defining factors in life. And the people who live within the confines of these elements have learnt to be completely at ease and in harmony with the challenges they face. When nature provides something that is raw and extreme in other parts of the world it is a disaster, whereas it seem to be the norm in the mountains.

An example of this was an extreme weather event in the Pyrenees a few years ago. It was a hail storm of biblical proportions. The hail stones were the size of golf balls, no exaggeration! But greater than the size of the stones was the velocity with which they were literally being hurled out of the sky. All the street light were smashed, our outdoor furniture looked like it had been in a shoot up and every single car in the village was pin dented. It passed through twice in two hours and the following day there was a prediction for a further storm. This didn’t worry the locals one bit, they just brought out their mattresses, placed them on top of their cars for protection and…slept easy?!

Watching the farmers and shepherds in the Picos De Europa is like stepping back in time. Driving on a high, narrow road invariably ends up in stopping for herds of cows to pass by as they are shepherded from pasture to pasture. Sheep, goats, horses and cows – all the farmyard creatures are represented. Each time we visit the Picos we are generally stopped by all of these.

The village we work in, Tama, has its annual festival every time we are there. Hectic doesn’t really cut it as a word to describe this! Cows, bulls, calfs, horses, foals all being rallied around onto a field in the middle of the village – it’s carnage. Noisy; animal bells, animals cries, grunts, dogs herding, people shouting hearty “Hola’s” to their fellow farmers. Then begins the showing off the prizes stallion, along with endless negotiation for sales of prize cows, bulls and every other farm animal. Obligatory drinking of Orujo commences next once the animals are safely back at pasture. This is still surprisingly early!

Overlooking the Picos De Europa, whilst walking through many small, traditional mountain villages 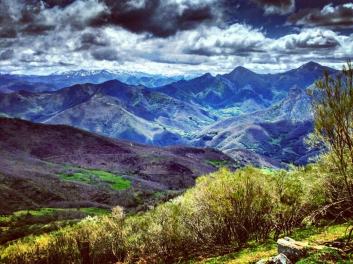 A view out over the Picos De Europa 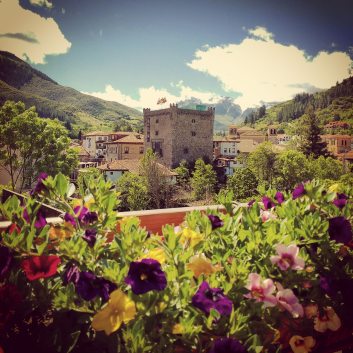 The wonderful town of Potes

The Pyrenees are a slightly different beast. In the Picos De Europa the national park is protected from becoming a ski resort and as such is far more wild and has a much slower rate of development. In the Pyrenees however, the ski industry has well and truly landed. This means that the rate of development in all areas, but particularly economically in the hospitality industry, has rocketed. Few traditional farmers remain, especially on the Spanish side, although the French side seems to have the luxury of a government which gives huge subsidies for farmers and as such many continue.

French Pyrenean farmers mostly deal in Brebis fromage, or sheep’s cheese, for which the area is famous. And rightly so, it’s yummers. The other is meat farming; cows and horses. Now if I were a cow and was placed at the Ayous Lakes or in the Ordesa Canyon, I would be pretty happy with life, but that doesn’t negate the inevitable ending. Much of the agricultural land in the Spanish Pyrenees was purposely flooded by Franco for use as reservoirs and later hydro energy – a power tool by the General to control water further down in Spain. Thus, farming took quite a hit in the Spanish Pyrenees.

Despite this developmental change, the soul of the people who live in the Pyrenees is much the same as other mountain people I’ve had the privilege to live with and learn so much from. Mountain communities seem to embody a hardy outlook on life with a far calmer, get-it-done approach to problem solving which hasn’t lost it’s sense of collectivism. Maybe this is due to years, decades of isolation, perhaps it’s just the community spirit throughout Spain, although it was something I also noted in the Dolomites in Italy. A general respect for the awesomeness of their environment is also prevalent; an innate ability to know the limits of danger within the domain is possessed by all. Whether this is when doing extreme sports like climbing, or skiing, or just rescuing a car from a snow-filled road, the element of danger is inherently known.

Learning from this has been insightful in my own life and expanded my horizons when it comes to daily challenges and problem solving. I think the sense of stoicism must appeal to the stiff upper lip lurking within, but it’s not devoid of emotion or community; in fact it seems to be an elegant mix of it all.

With the team high up above the Valle De Tena

Canyon walls at Ordesa with a mega thunder storm! 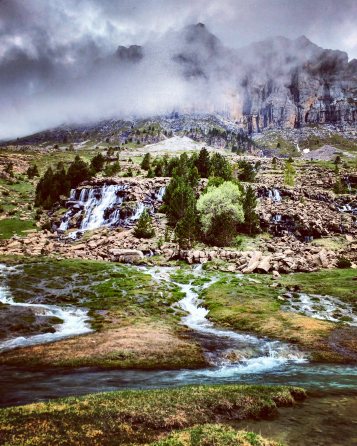 The team encountering every type of condition at Lac D’Ayous 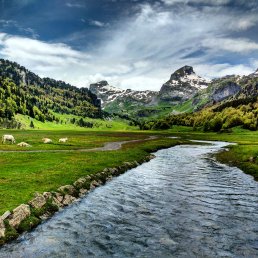 Idyllic meadows in the French Pyrenees

Daffodils on the GR10

Walking the GR11 routes at Bachimaña 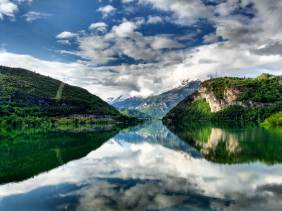 The waterfall Oros Bajo is one of the best ever 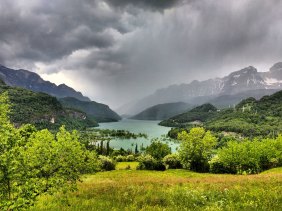 The drama of a storm moving into the mountains