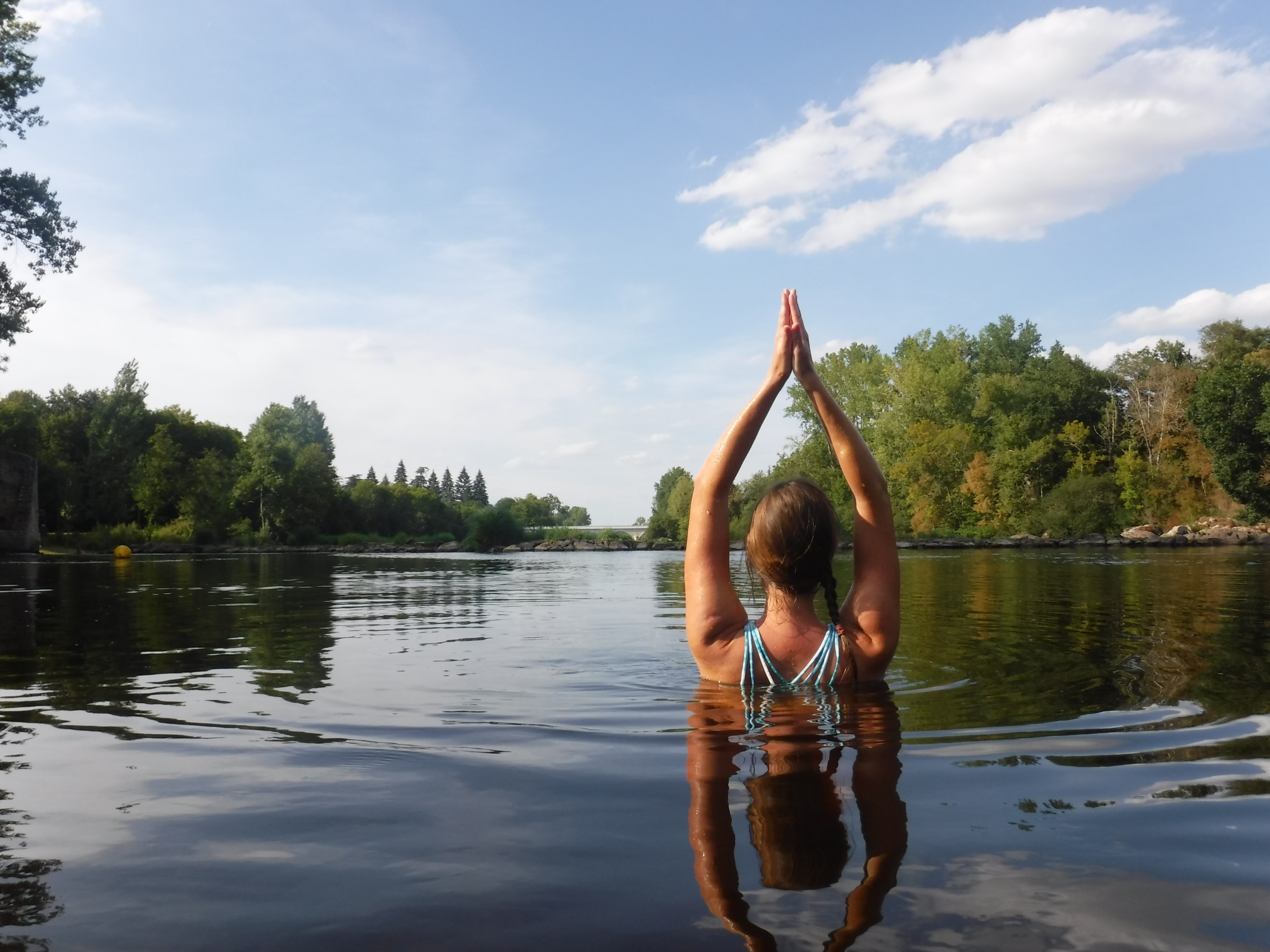 Compound interest is a term few really understand, yet it adds a significant cost to what is already the largest investment most people make in their lives, the mortgage. This impacts everything, our car, our credit card our store cards and we end up, as a friend put it, running in order to stand still. I want to turn this concept on its head and talk about compound savings. 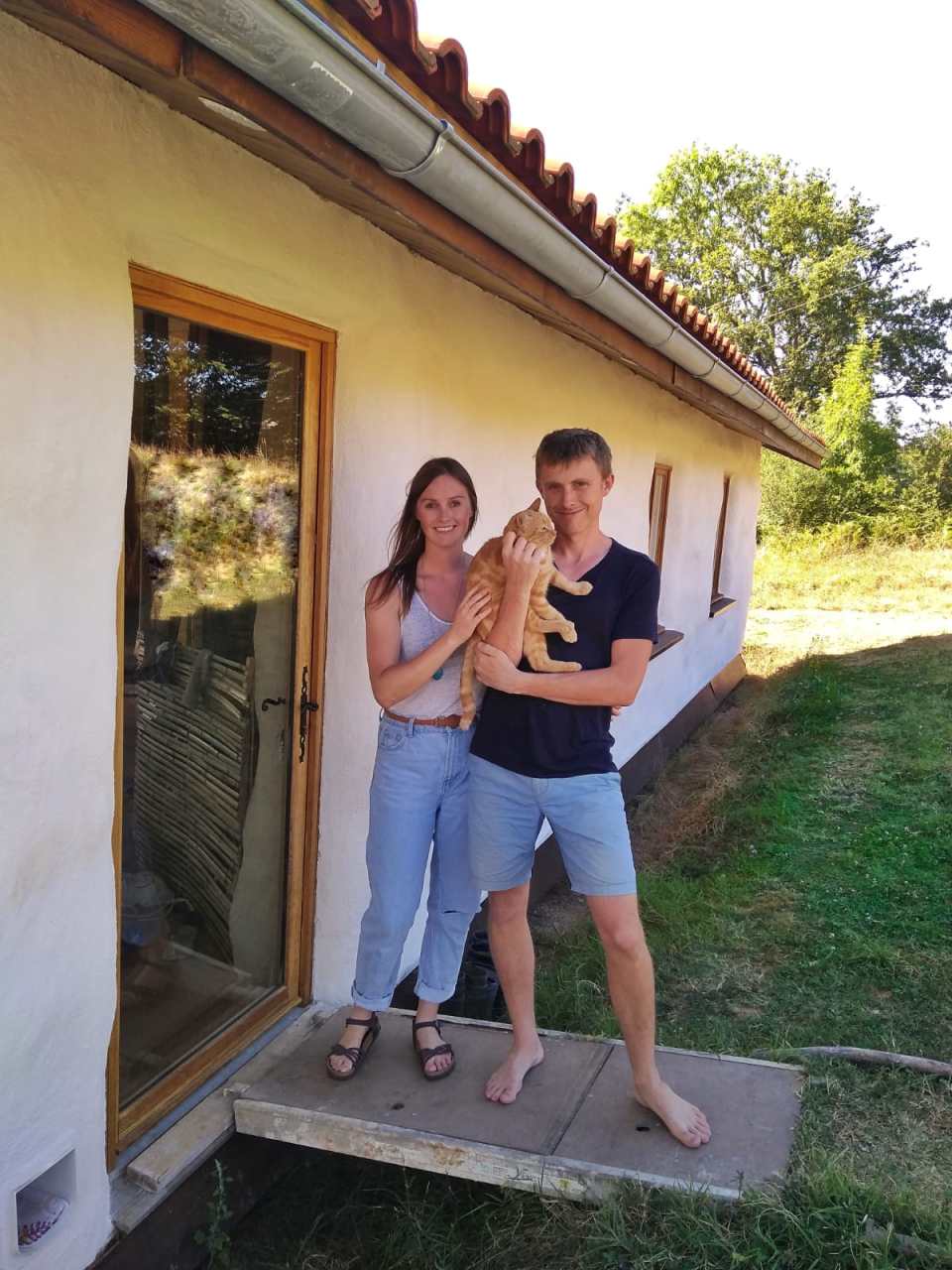 This is a direct result of experience, rather than any in-depth research. Consider the following scenario: a couple, who between them earn significantly less than the average salary for a single person in the UK, a house with no debt, outgoings of no more than 1000 Euros a year covering gas, internet, phone contracts and wood for the stove. Add in (a generous estimate) 3000 euros for the soon to be added charge of ownership tax and you get 4000 euros a year, or, 333 euros a month.

This is more or less our situation, we work 3 ½ days a week, have plenty of disposable income and can invest more than enough time and money in our various projects and hobbies. 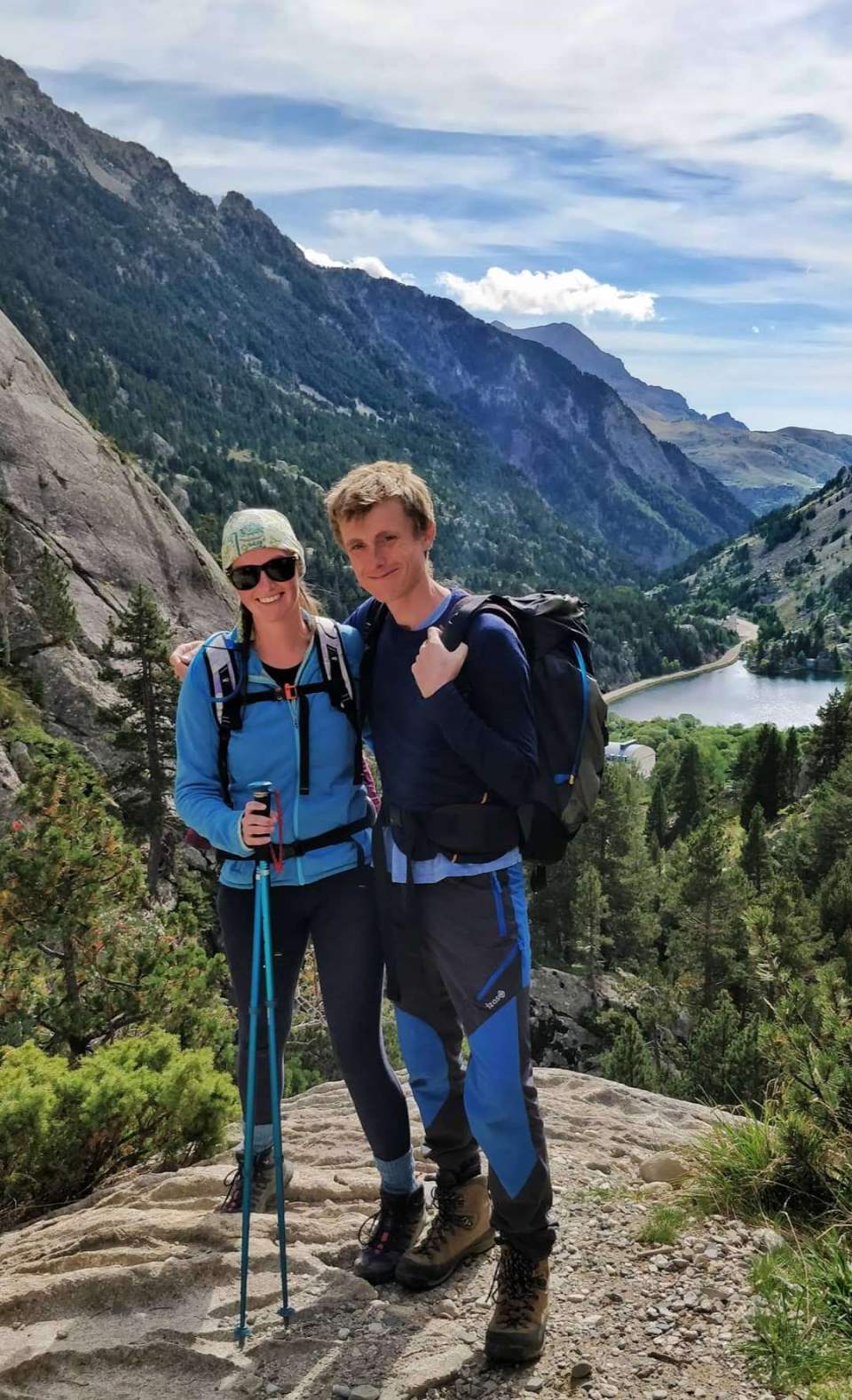 We love the mountains, and have plenty of time with which to pursue this and other passions.

Rather than any dogged pursuit of such a life equation, it has been the result of what we may call ‘compound savings’ – a principle perhaps familiar to permaculture. In effect,  large amounts of thought and effort are put in at the outset of a project, after which you enjoy the savings and efficiencies you anticipated, as well as untold others you had barely considered.

Let me give you an example: We have five 100w solar panels which charge a homemade battery pack. It provides us with enough juice for lights, water pumps, internet and charging devices, we have never and will never receive an energy bill. These savings were clear from the off, and the reason we decided on such a system. However, what we hadn’t necessarily anticipated, but have benefited from enormously, are the untold savings by not buying stuff which we simply can’t power. Imagine the time saved in not choosing a dishwasher, installing it and replacing it when designed obsolescence inevitably kicks in. Our house is quiet and uncluttered, the TV is never just ‘on’, because this would be a mindless waste of energy and more often than not, a distraction from uncomfortable self-reflection. We have silence most of the time, the crackling of the fire in the winter the only noise punctuating the tranquillity. 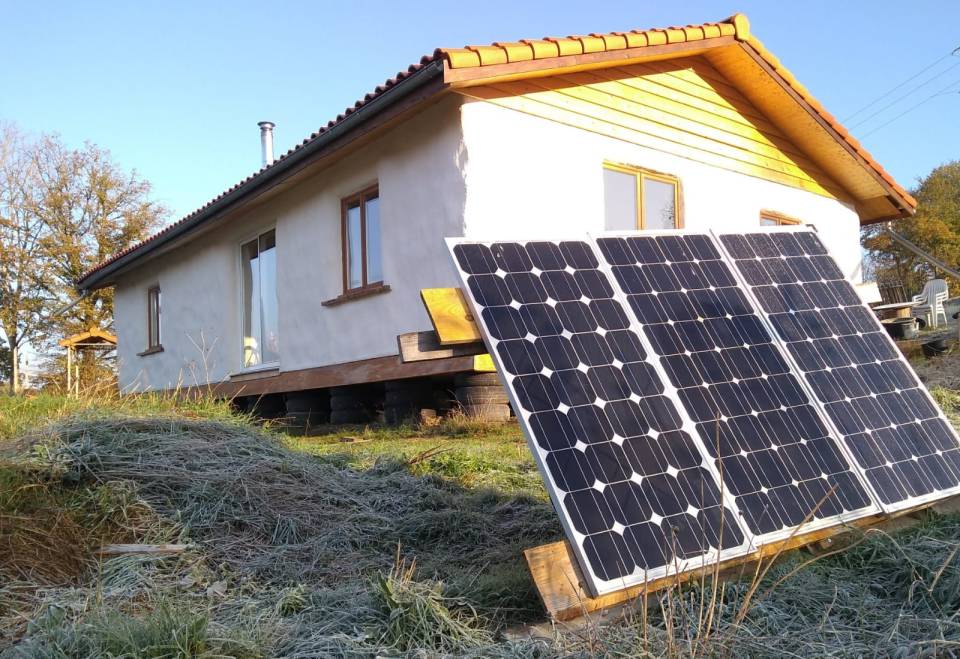 And of course the money, I mean, add it up, blenders, washing machines, tumble driers, microwaves, tools, boilers, kettles, toasted sandwich makers.….. The list goes on, all of these further busy our lives in the pursuit of simplicity. We have been fooled. The beeping, whirring, spinning and humming of these devices disrupts our mental state and, look around, almost every appliance you own will be in a landfill within a decade, now multiply that by every household in the developed world……

‘But what of the inconvenience?’ one might ask. Well the only downside we have experienced is the need to visit a laundrette once a fortnight for a big wash. But even this provides untold pleasures, I look forward to my sheets smelling clean, I usually do the shopping while it’s going and we’ve had some wonderful chats with people whilst watching our pants spin around.

We need to actually do the washing up, but with plenty of time to do so it can be done mindfully, grateful for the fact I have perfectly functioning hands which can fumble about in the soapy water in search of a teaspoon, anticipating the next time a plate will be dirtied by a lovingly prepared meal. A machine takes away these opportunities in the name of ‘saving time’ which we subsequently plough into mindless jobs, where is the sense? 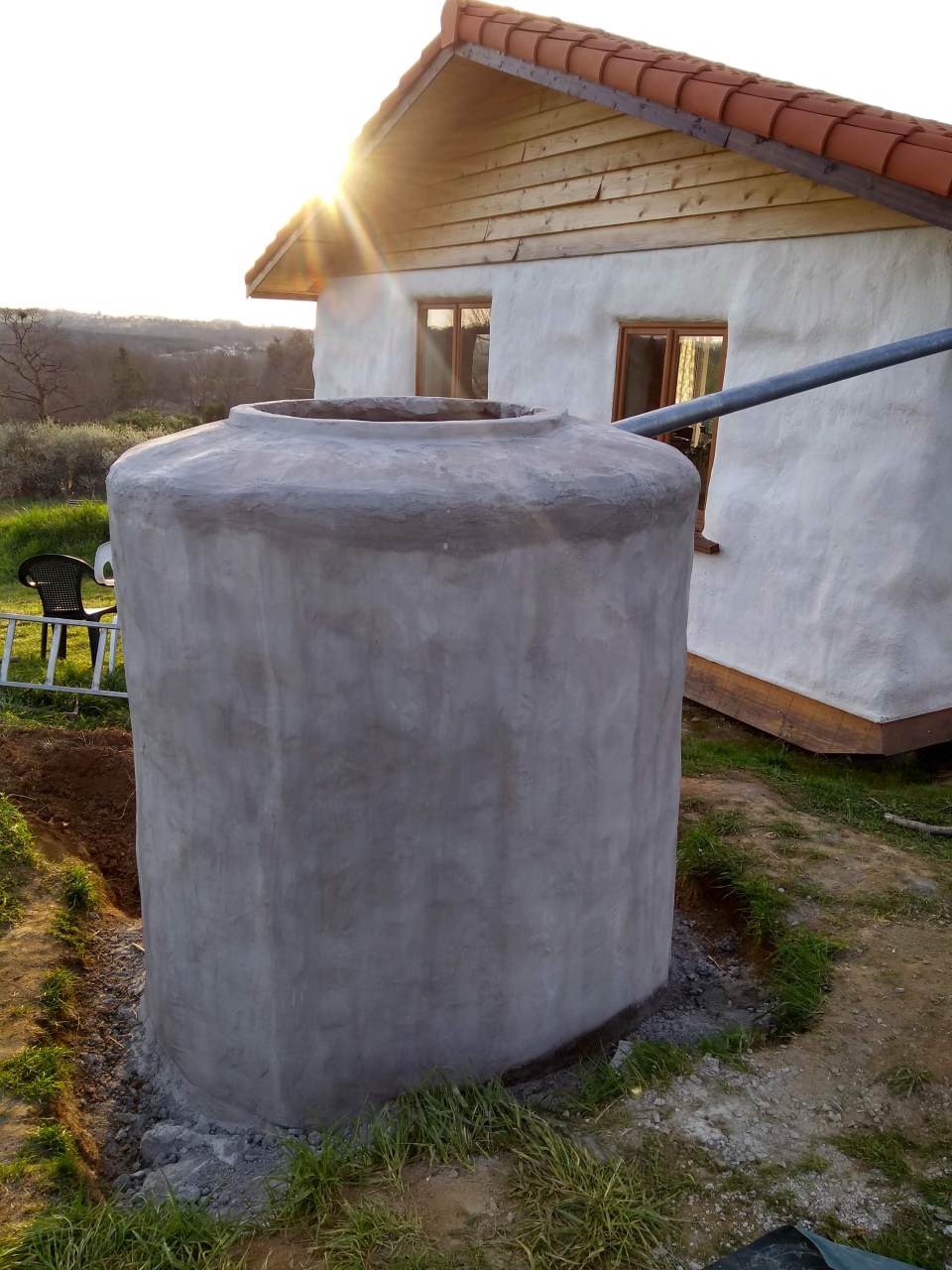 The water system was fun to build, creates a connection with the world around us and provides untold joy

Another example is our water system. We have two tanks which we constructed ourselves for a little less than the cost of just connecting to the utilities. Now, of course we wanted to avoid bills and create a low-outgoing lifestyle, but we couldn’t have anticipated the sheer joy of building it with friends, showering in rain water, or the interest the tanks have sparked in the local permaculture community not to mention the skills we have gained in putting the plumbing system together. Equally, I had no idea the delight I would feel upon hearing the pitter-patter of rain on the roof. There were two severe heat waves in France this summer, hose-pipe bans and water shortages, we didn’t even notice.

More specifically, harbouring your own resources turns you into a steward and, whether it be human waste, solar power or water, creates a tremendous sense of connection with the more-than-human world which is both largely absent for the vast majority of people and  utterly trans-formative. I simply don’t walk down the cleaning aisle in the supermarket, because I don’t want any of that rubbish in my compost or water supply. We consume between 2% and 4% of an average households electricity, roughly 10% of the water used by an average couple in the uk and compost 100% of our toilet and food waste into the richest compost I have ever seen. But, crucially, none of these came about through restriction, sacrifice or suffering, it happened automatically once we had a sense of symbiosis with the world around us. 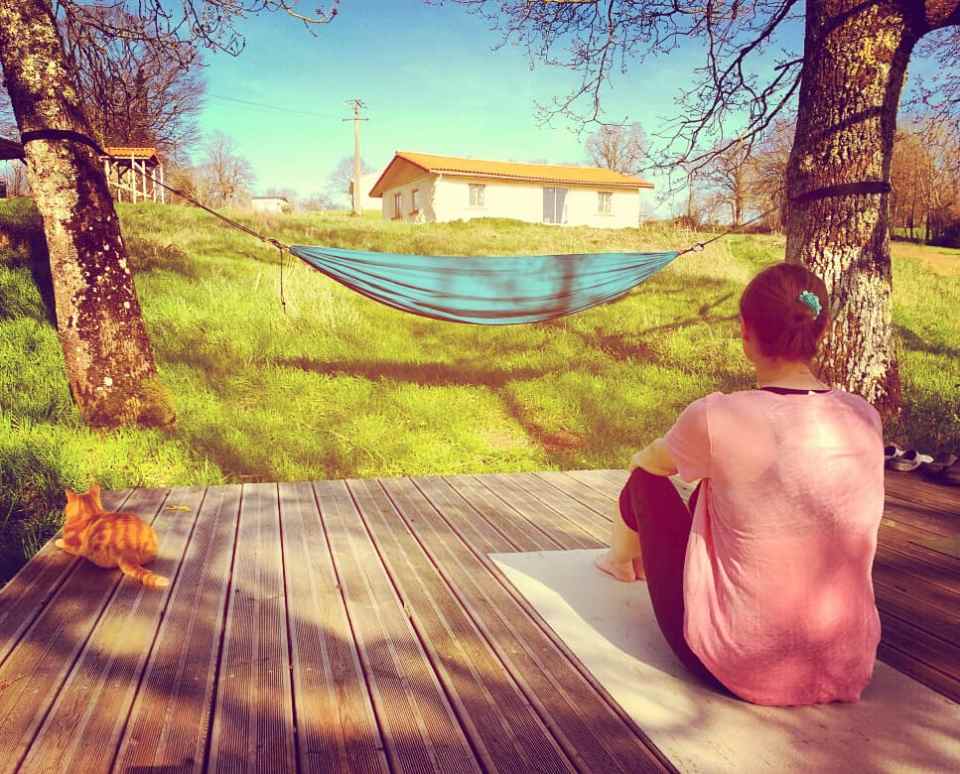 The house provides so much more than shelter, it is not the ball and chain that so many houses become, it sets us free and brings indescribable delights

The end result of these ‘compound savings’ is a lifestyle with incredibly low outgoings and perhaps the greatest compound saving of all: time. We didn’t create these systems so that we could spend time in the mountains, meditate, practice yoga or simply ‘be’ without the need to ‘do’, but that is the result and we live it on a daily basis. It does require effort and determination, but the savings are richer than you can possibly imagine. When asked to write a list of what is important in life, I imagine most people would write similar things: peace, quiet, health, family, love….. However, unless we make life choices which actually prioritise these, they will not materialise. It’s the compound impact of these misguided, culturally-driven choices that have got us into the mess we are currently in, more of the same will not change this, to believe so is wishful thinking.