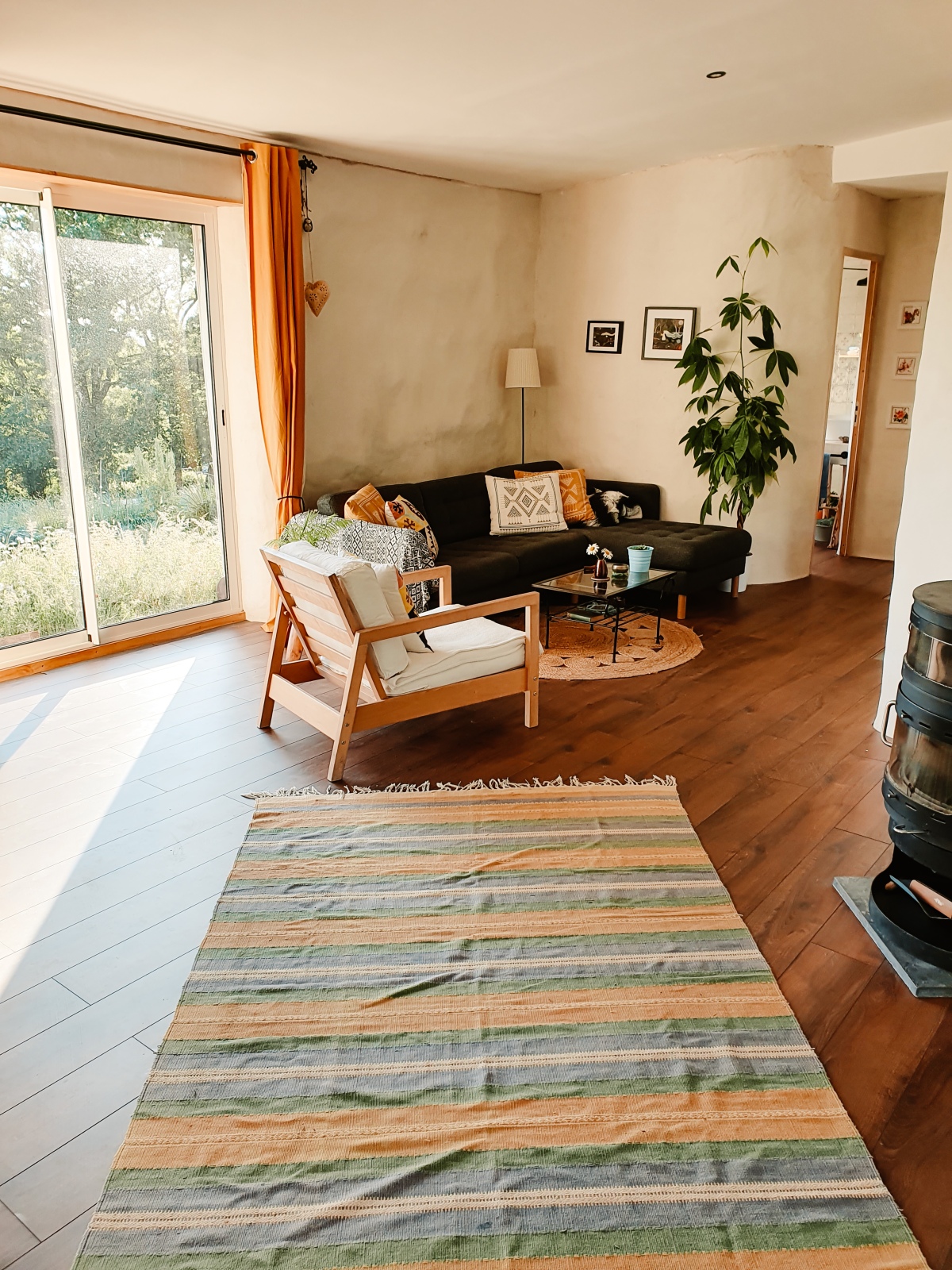 I’ve been rather quiet on here of late, but that doesn’t mean that things have ground to a halt at Les Vignes Basses, in fact they’ve classically ramped up a bit in a race to the finish line.

What with permaculture, yoga, meditation, work and general self improvement, alongside the omnipresent house project, I haven’t dedicated time to online updates. With the advent of the house completion however, now is the time to change that 😊

For this post, I feel like the pictures will do the most of the talking. Suffice to say that we love, love, love living in the straw bale house, affectionately known as ‘Little Strawbs’. It’s taken us quite a while to get to this stage, as those of you who have been part of our journey will know. The air quality inside is unlike any other house I’ve been in, due to the natural building materials allowing it to breathe. Many visitors mention this straight off the bat, confirming to me that the feeling inside Little Strawbs is unlike other houses built with more mainstream materials. The lime plaster helps to maintain a constant dry climate within, dispensing with the need for an extractor fan in the bathroom; the lime gobbles up excess humidity with pleasure.

The insulation is second to none. Winters are comfortable, no doubt about it. Our little wood-burner is often out of use due to passive solar gain from the south-west facing glazing. In the summer, if managed well, i.e. trapping the cool morning air in and having the windows covered outside, the house performs nobly, and it had quite a test this week as another scorching heatwave seared through France. Even at 40C we were all comfortable, warm but still comfy! And with no use of A/C, only some dinky USB fans.

Systems-wise, we are delighted with the simplicity of the setup. It really is like a campervan-house. There are, of course, elements which need improving, just like any house, but overall the water, electricity and waste systems function in a manner that fully caters for our needs. Living off-grid feels as though it has become more poignant in our current times. As I write, our house, meadow and valley, which all suffered greatly at 40C yesterday, are shrouded in smoke from surrounding wildfires, the climate crisis is now right in my face. Not to mention the cost of living crisis, something that gratefully doesn’t touch us as much as some due to the lack of bills. Finding other sustainable and harmonic methods of living feels more and more necessary, both for personal survival and that of our environment, although personally (I’m aware this is a somewhat unpopular opinion), I feel we have gone well past the point of no return.

Choices-wise, I’m quite happy with the choices we made along the way. In the sense of how, when, what and why we used what we did. Not everything is recycled, which is a small gripe, but I’m pleased when I cast a glance over the house at the proportion of materials and items that are, and at some point I need to practice a little more self-compassion.

Anywho, I said I wouldn’t chatter, but alas! Here are some photos of the finished house. Having said that, we are still working on an adjoining outdoor decking, a small overhang on the gable end and finished doors for the internal cupboards. I’m sure the endless line of little jobs sounds familiar…

I would be delighted to answer any questions about the house, its design, choices surrounding elements inside it, outside it etc., anything really 😄

Here are some piccles of Little Strawbs:

Little Strawbs is the physical manifestation of countless positive words, thoughts, intentions, advice and actions. For this we are forever grateful 🙏

I would like to leave you with a quote from the magical, mystical and marvellous David Abram…

Caught up in a mass of abstractions, our attention hypnotised by a host of human-made technologies that only reflect us back to ourselves, it is all too easy for us to forget our carnal inherence in a more-than-human matrix of sensations and sensibilities. Our bodies have formed themselves in delicate reciprocity with the manifold textures, sounds and shapes of an animate earth […].

To shut ourselves off from these other voices, to continue by our lifestyle to condemn these other sensibilities to the oblivion of extinction, is to rob our own sense of their integrity, and to rob our minds of their coherence. We are human only in contact, and conviviality, with what is not human.